This is the first part of the article "Memory Usage Optimization in Charts Library", by Andreas Suurkuusk, co-founder of SciTech Software.

UPDATE: The source code modifications performed in this article have now been incorporated in the SciChart library (v4.2.4.10393).

We want to thank Andreas for the in-depth analysis that he has performed on the SciChart WPF Charting software. We deeply care about performance and efficiency and are pretty impressed with his expertise and how he's addressed some deep issues in our High Quality renderer plugin. We will be including these as a pull request to SciChart WPF and it should benefit our other customers as well. Thank you very much!

When we converted the user interface of .NET Memory Profiler from Windows Forms to WPF (for the v5.0 release), we needed to replace the charting component we used for the real-time presentation. The component previously used was developed by our-selves and was very old. It was originally written in C++ (using Borland C++), then converted to Visual J++, and finally converted to C# and the .NET Framework. However, even though our in-house charting component was old and lacked a lot of features, it was very fast. So we wanted the replacement component to be fast as well. For our other UI components we use the Developer Express library, but their charting component is designed for business charts rather than real-time graphs and the performance is way too slow. So we looked for alternatives and found the SciChart library, a WPF charting library that focuses on high-performance real-time charts.

The SciChart library has worked well for us, but when designing the “Show recent data” feature in version 5.5, we noticed some performance issues, mainly related to excessive memory allocations and garbage collections.

I had written a small test application which presented two sine curves on two different x-axes (see screenshot below). It was this test application that exhibited the excessive memory usage.

The SciChart library has the possibility to select between different chart renderers, e.g. a high-speed render, a high-quality render, and a DirectX renderer. In this test application I am using the high-quality renderer and, considering its name, it is not designed with performance as the highest priority. Nonetheless, it provides the opportunity to show how the memory usage can be improved using .NET Memory Profiler. 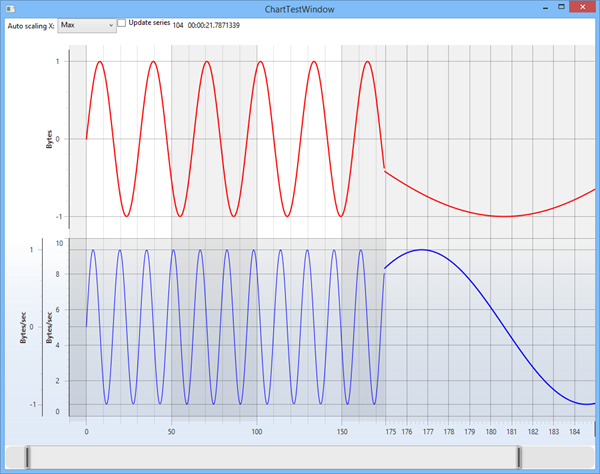 To better evaluate the memory usage of the test application, I added a small automated test, using the .NET Memory Profiler API. The test performs the following actions:

The code below conceptually shows what the test looks like (in reality it is a bit more complicated):

The screenshots below show the data presented by the real-time view when running this test. 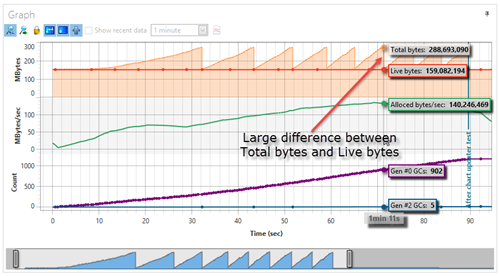 Another thing that can be observed is that the total bytes used reach about 275 MB, but the live bytes used (by reachable instances) is about 152 MB. So there is a memory overhead of over 80%. Furthermore, a full (generation #2) garbage collection had to be performed to reduce the memory usage. Generation #2 garbage collections can be slow, especially in a complex application with high memory usage.

The comparison of the two snapshots collected by the test reveals the following: 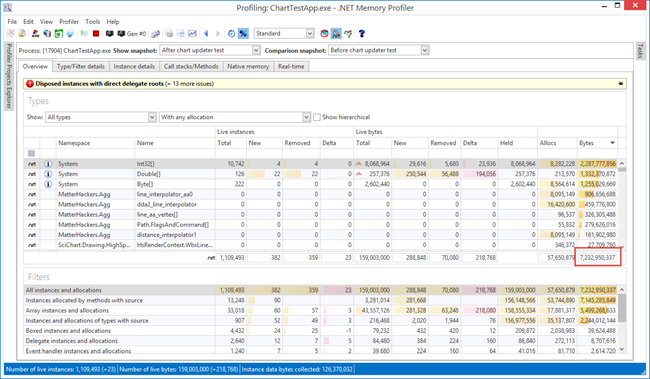 Close to 7 gigabytes of memory is allocated (and garbage collected) during the test. The types with the most allocated bytes are Int32[], Double[], Byte[], and line_interpolator_aa0 (internal class used by SciChart).

Clearly, there seems to be an opportunity for optimization here. To be able to compare the optimization progress, I save the session as “InitialChartTestApp.prfsession” and create a profiler project which includes the initial session as a comparison session in the real-time layout. To create the project, the following steps were performed:

The screencast below shows how the project is created. 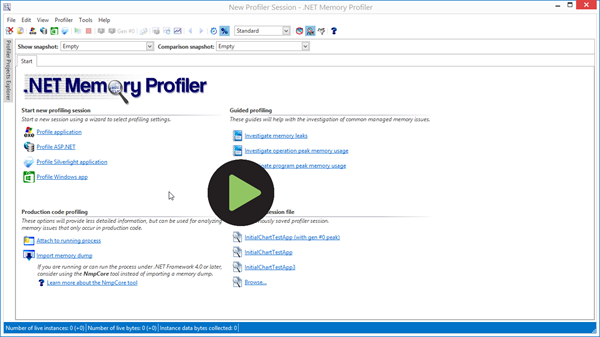 Now we have a good starting point for the memory optimizations. In part 2 of this article, I’ll start to optimize the test application.