This is the second part of the article "Memory Usage Optimization in Charts Library", by Andreas Suurkuusk, co-founder of SciTech Software.

In part 1 of this article I prepared the test application and created a profiler project to use when testing. Now it's time to start optimzing.

Let’s start with the high memory overhead. To investigate and optimize the memory usage, the heap utilization tracker may be used (e.g. by selecting the “high” profiling level when starting the profiling session). Unfortunately, the heap utilization tracker currently causes a significant performance overhead (this is planned to be improved in a future version). So, instead I enabled the peak snapshots tracker. The peak snapshot tracker allows snapshots to be collected at the peak memory usage.

Re-running the test with the peak snapshot tracker enabled (this can for instance by done by using the “Investigate operation peak memory usage” profiling guide) provides the following peak snapshot information:

This shows that of the total 119 MB of Double[] arrays, almost all memory is used by unreachable instances.

To get more information about the unreachable bytes, I investigate the details of the Double[] array and sort the allocation stacks by “Unreachable bytes”. This reveals the following: 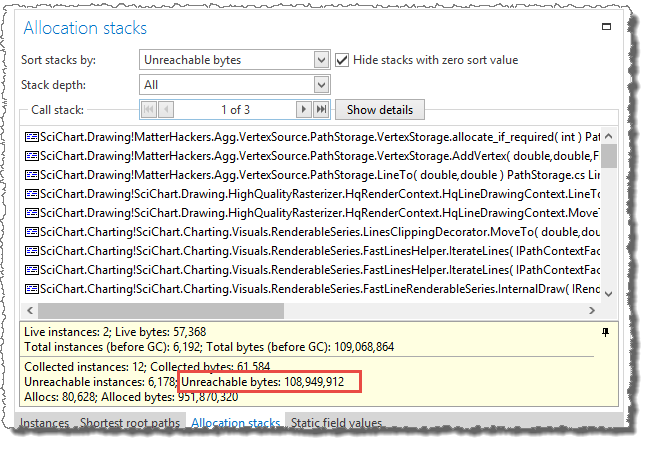 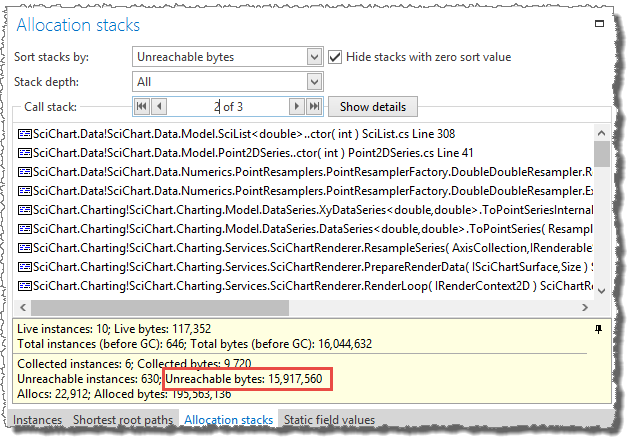 It would certainly be a good idea to reduce the allocations performed by the presented call stacks.

The HqRenderContext and HqLineDrawingContext are internal classes used by the high quality renderer.

To optimize the allocations, I tried to re-use previously created render and drawing contexts:

Some additional code changes were also needed to make sure that the contexts could be correctly re-used after being disposed.

This call stack allocates Double[] arrays during data resampling (DataSeries.ToPointSeries) which occurs before rendering the charts. Data resampling is necessary in order to retrieve the underlying data needed for rendering, convert it to the correct format (i.e. Double[] arrays) and possibly reduce the number of data points. This is a highly optimized algorithm, with generated code for fast conversion between the underlying data (e..g. Int32[], Int64[], Float[]) to the Double[] arrays needed by rendering.

However, the data cache is stored in the underlying data container (DataSeries) and in this test application, each DataSeries is used twice in the rendered charts, once for each x-axis. Since the x-axes have different ranges and different sizes, the cached data cannot be re-used. Instead, the cached data will be recreated twice for each render pass.

I modified the code so that the cached data is associated with the chart series renderer (IRenderableSeries) instead of the underlying data (DataSeries). To avoid too much code changes and to avoid changes to public interfaces, I used a ConditionalWeakTable to associate the cache with the series renderer. Even though ConditionalWeakTable is intended to be used by compilers according to the documentation, I find it useful in cases like this, when you want to attach additional data to “external” instances.

After applying the code changes above, I ran the test application again, using the profiler project previously created. 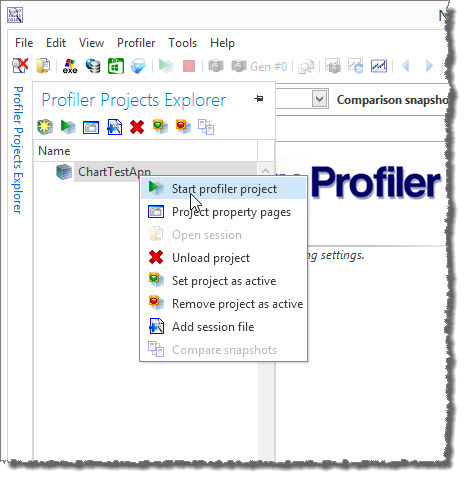 After finishing the test, the real-time view looks like this: 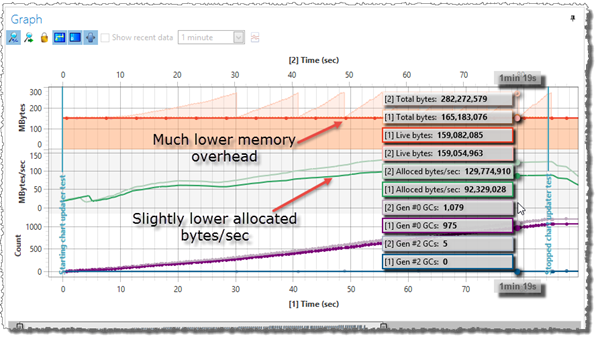 There are a few things that can be observed in the screenshot above:

The purpose of this optimization was to reduce the memory overhead and to avoid gen #2 garbage collections. Items (1) and (2) in the list above indicate that we have succeeded with this goal. Still, there are more optimizations to perform. I will continue with this in part 3 of this article.