This is the third part of the article "Memory Usage Optimization in Charts Library", by Andreas Suurkuusk, co-founder of SciTech Software.

In part 2 I reduced the memory overhead of the test application by avoiding allocations of Double[] arrays. But, even after the array optimizations, a significant amount of allocations are performed.

It is possible to use the real-time view to investigate the total number of allocations performed and bytes allocated. One way of doing this is to click on the legend for the “Allocated bytes/sec” selector and select “Accumulated from origin”. This will present an accumulated count of allocated bytes since the selected time origin. 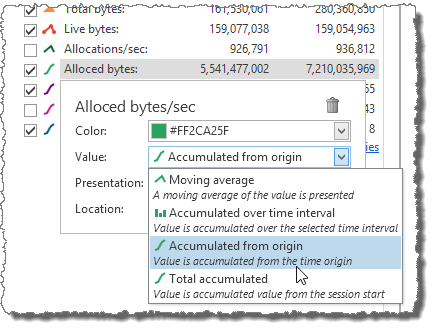 After changing from “Moving average” to “Accumulated from origin”, the following numbers are presented:

The number of allocated bytes has decreased by about 25% (from ~6,800 MB to ~5,300 MB) and the number of gen #0 garbage collections has decreased about 9%. Let’s investigate the collected snapshots to see if there are more optimizations to perform.

As expected, the Double[] arrays are no longer included in the top of the list when sorting by allocated bytes. The types with the most allocated bytes are still Int32[], Byte[], line_interpolator_aa0.

The top call stacks, sorted by “Alloced bytes” are presented below: 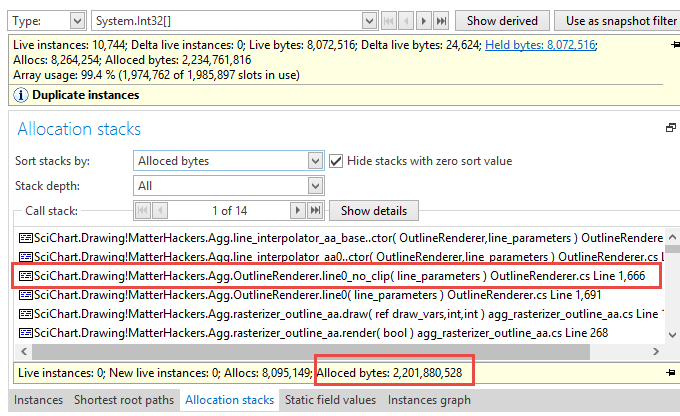 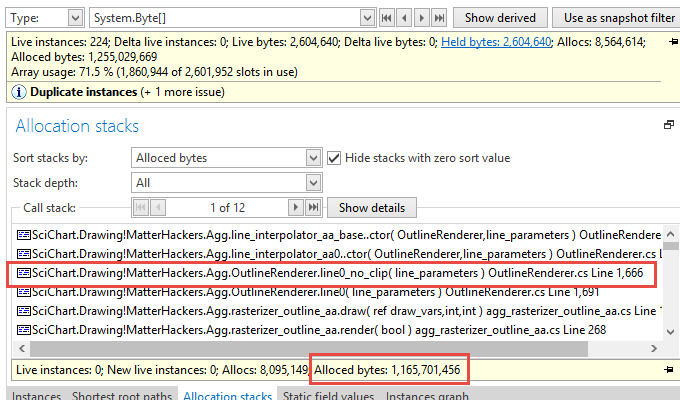 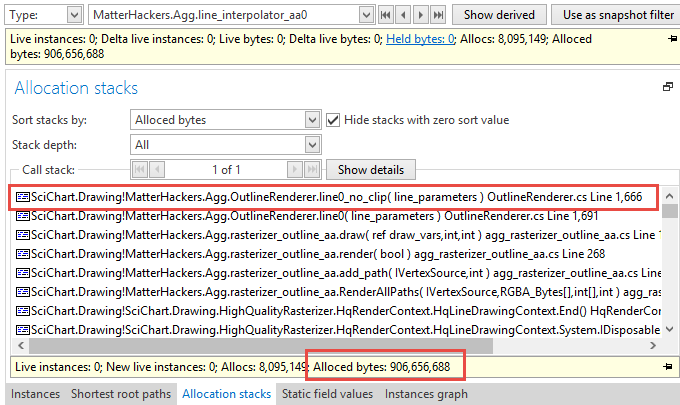 These call stacks are responsible for almost all the allocated bytes, so there’s no need to investigate further call stacks. The common method in all call stacks is the OutlineRender.line0_no_clip method, which allocates a line_interpolator_aa0, which in turn allocates the int[] and byte[] arrays.

Similar to the solution with excessive Double[] array allocations (in part 2), I modified the line0_no_clip method to avoid an allocation each time it is called and instead reuse a previously created instance.

After applying the necessary code changes, once again I ran the test application using the profiler project previously created. 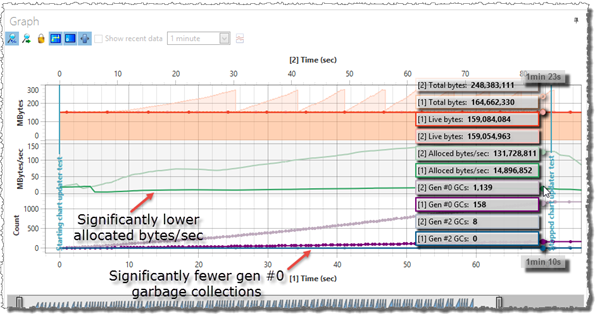 There are a few things that can be observed in the screenshot above:

The purpose of this optimization was to reduce the number of allocated bytes and the number of garbage collections. Items (1) and (2) in the list above indicate that we have succeeded with this goal. Still, there are more optimizations to perform. I will continue with this in part 4 of this article.